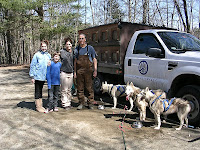 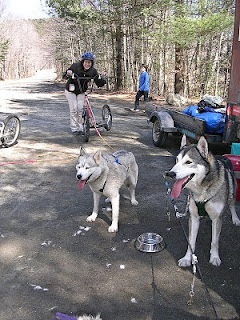 It was time to scooter and Tom was going first...

A word about the dog’s need to run: Ken explained that Siberian Huskies are northern transport dogs originally bread to pull sleds and have adapted to extremely cold temperatures. Their recall in not good. If they take off, they may not come back, “This is probably not the dog you’d want to have for a pet and leave the door open.” said Ken. All well and good, but this made me think that maybe we’d loose Tom and the dog and they’d both be hunting for food in the wilderness of Vermont in their own rendition of “Into the Wild.”

During our test drive of the scooters, we could tell that they were very sturdy and easy to handle (comforting). Ken rigged a dog to Tom’s scooter and to his and they were absolutely raring to go! At the same time, the other dogs went crazy barking and caring on; clearly they wanted to go too! Eager to take off, the dogs obeyed Ken’s command and off they went! As they scooted through a big open field, Tom looked liked he was perfectly at ease, sort of like taking his scooter to the commuter train each morning, but with a dog pulling! 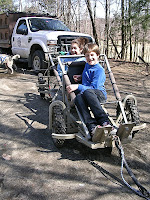 Next it was Isabella’s and then my turn. We agreed that the scariest or most challenging part of dog scootering is the moment before the dog takes off. Managing the dog’s need for speed, its direction and actual pulling was easy enough and if you could relax into it, it was great fun. It was the getting ready to go that psyched us out a bit.

The carting is really cool too. Mainly because you can sit back and let Ken handle the dogs, no performance pressure! I was amazed at how far in front of the cart the dogs extend. The kids had only five dogs pulling and yet they seemed to be on a line extending at least eight yards ahead. Imagine those big time mushers with 16 dogs pulling the sled! The whole affair would be about a city block long!

This was indeed a once in a lifetime experience. Being around that many Huskies, learning about their habits and nature, seeing Ken’s expertise in handling the dogs and the gear, and finally having the dogs actually “transport” you, was really something special. Another great thing to do in Stowe, “on the shoulder.”