Padova, known as the city of frescos, but check out the Ghetto 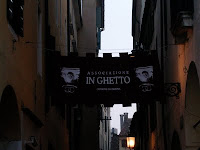 Between Venezia and Vicenza lies the university town of Padova. From science to art, Galileo to Giotto, Padova says to visitors, "I am smart, accomplished, artistic and civilized. Look at me." One becomes dizzy trying to fathom the art, science and culture that this city has harbored over several centuries.
What to do: No visit would be complete without a seeing The Basilica of St. Anthony, but that is an entire discussion for another post.
A smaller less "important" destination attracted me, the former Ghetto. Via S. Martino e Solferino marks the center of the Ghetto. Beginning in the 14th century Jews established a neighborhood in this area of the city. Then in the 17th century 4 doors quite purposefully segregated them from the rest of the populous. 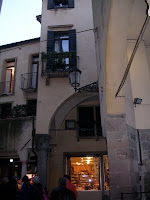 Obviously space in the Ghetto was at a premium, causing many homes to grow up
instead of out. Today the neighborhood is cozy and welcoming. Lanterns oozing a golden glow and narrow pathways, invite tourists, friends and neighbors to linger. Much like New York City's lower-east-side Jewish neighborhoods, the Ghetto has gentrified, groove-i-fied really. It's all chic house-ware stores, shoe stores, local fashion boutiques, and funky bars and restaurants. So if given the time what you might do, is shop!
What to eat: We stopped at Bar Corte Sconta on Via Dell'Arco. This was a small bar open to the street serving up assorted crostini, including a local favorite of baccala, or cod. Swigging Soave, a personal favorite (imported from just miles away), we journalist welcomed a chance to just hang. 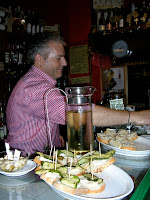 Where to stay: Hotel Majestic Toscanelli. I ducked in to this hotel to grab a brochure. Attracted to the facade and the location, it looked like a nice, reasonable four star–but I can't recommend it beyond that.
More on Padova, the Basilica, and an outstanding lunch next.
Posted by Cathie Arquilla

Love reading about Venice...sniff, sniff, I coulda been there. Hey your story is up and looks great on GoNOMAD!