Vicenza: the city of Palladio 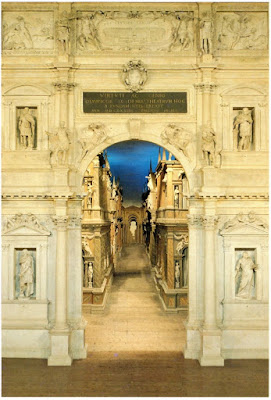 Located in the center of the Veneto Region, Vicenza is an architectural dream-scape. Connect with a narrative history of architecture at its finest. Take in that which is Renaissance, Baroque, Neo-classic and more. This "theater-city" is a must on anyones itinerary exploring the region.

Get a guide. Ours was Monica Facchini. Monica and her colleagues will customize a tour for a group from one to 50 people. The tour may encompass Vincenz's "Pallidio" city center, as well as several of the 16 Palladian Villas in the Vicenza provence.

The breathtaking Teatro Olimpico is a must see. This is the first modern public theatre built and used during the Renaissance. It screams, Shakespeare. Palladio's design direction was to build a theater in the "Roman Style." Mission accomplished, and how! Commissioned by the Accademia Olimpica in 1555, an organization which still meets in the theater, Oedipus Rex is one of many plays you can see at Teatro Olimpico today (from Spring to Autumn, plan ahead).

Palladio did not live to see his full design executed, the architect, Vincenzo Scamozzi realized the Olimpico dream. Scamozzi's use of architectural perspective, creating the illusion of seemingly endless streets on the stage is extraordinary. As is his use of trompe l'oeil throughout the building.

Ever conscious of budgetary constraints, Palladio requested that all statuary to be made from stucco. Napoleon had a mind to rip them off, but was dissuaded when he found out they were not real marble. Sometimes it pays to watch your lira.

As I mentioned in older posts. Italian women are fashionable and sexy. Live your Sophia Loren fantasy, put on a Ferragamo scarf, grab a Furla bag, drape on some gold*, wear a push up bra and let Vicenza celebrate your architecture. (But wear comfortable shoes!)

*Note: Vicenza is a leading European gold industrial area with over 1,200 firms crafting traditional to modern designs...all in gold...hum...
Posted by Cathie Arquilla