A Coat, Dad and Stockholm

My Dad liked clothes and he liked to travel. He wasn’t a nut about “dressing.” It came as second nature to him and I think most of the time he probably didn’t think too much about it. He had some nice Brioni suits, a cool gardening/fishing hat and some lovely ties.

He once told a story of leaving a cashmere sports coat at a restaurant in Stockholm, a city he was very fond of. Several years later, he returned to the same restaurant and surprisingly, they still had his coat. For him this said everything there was to say about the Swedes and their fastidiousness, their reliability and organization. Being Italian, and traveling to Italy often, where they have made an art of everything including nonchalance, the buttoned-up Swedes made an impact on my Dad.

He really was a wonderful combination of the two extremes. Yes, easygoing with a casual manner, but also very driven and ambitious.

Stockholm seems to be on the travel radar these days. The recent wedding of Crown Princess Victoria to “commoner” Daniel Westling AND the book, soon-to-be movie, The Girl with the Dragon Tattoo by Steig Larsson, has made Stockholm fodder for several travel writers/reporters/bloggers. Check out Mary Alice Kelloggs piece in Everett Potters’s Travel Report. It makes you want to go there now, even if you haven't left something behind! 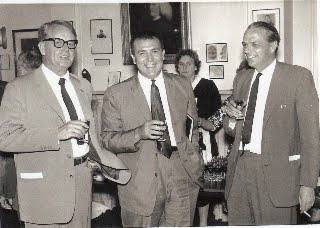